Family Values: An American Tragedy tells the story of a family torn apart by political religious extremism. Filmmaker Pam Walton and her father, a leading behind-the-scenes figure in the radical religious right, have had nothing to do with each other for over 15 years because of what her father calls her “sinful lesbian lifestyle.” Walton sets out to expose the hypocrisy that exists among the right wing’s “family values” activists, but along the way there is an unexpected turn. Family Values reminds us that “family” is a deeply personal experience.

“Elegant. This sly slice of intimate investigative reporting operates like a Greek tragedy, revealing a family schema resonant on a national level. Never has the personal smelled so political.”

“Family Values: An American Tragedy is a stunning document, a generous confidence shared with the viewer, haunting in its implications, so human and warm and universal in its perspective.”

“Family Values is the best elucidation of a family with an openly gay person and an anti-gay past that I have ever come across. It is riveting, informative, searingly honest, and moving.” 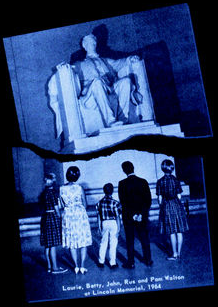