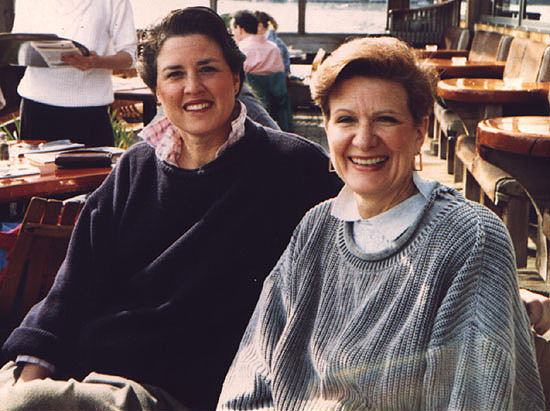 "...a film that can reach people and convince them that lesbians don't live on another planet."

BUY OUT IN SUBURBIA

"The feminist agenda is not about equal rights for women. It is about a socialist, anti-family political movement that encourages women to leave their husbands, kill their children, practice witchcraft, destroy capitalism and become lesbians." - Pat Robertson, 1992

Against the backdrop of the early nineties culture wars, Out in Suburbia spotlights eleven suburban lesbians, aged 25 to 67, who speak easily and frankly about their families, friends, and loves. A teacher talks about her struggle to come out to her students. A couple shows off the baby bedroom they have prepared for their new arrivals, twins. Can a Tupperware party be far behind? Bold and upbeat, Out in Suburbia demonstrates the extraordinary truth that lesbians are ordinary people.

"Truly wonderful! Thank you for designing a film that can reach people and convince them that lesbians don't live on another planet."

"This 28-minute video about lesbians in the suburbs is a model of how to make an accessible, honest, and life-affirming statement directed at mainstream viewers."

"In sharing their experiences about their lives, these women expose the shallowness of commonly held stereotypes and make an eloquent case for treating all people with respect."