The National LGBTQ Task Force estimates 3 million LGBTQ+ elders now live in the United States. The audience is rapidly increasing for a documentary that explores a retirement community created intentionally for them. Contact Pam Walton for more information about this newly released documentary.

“Walton’s documentary showcases Fountaingrove Lodge in Santa Rosa, CA – one of the only LGBTQ retirement communities in the U. S. that’s a model for more just like it. I have personally spent time at Fountaingrove Lodge and was moved by its energy, sense of community, and commitment to creating a place where LGBTQ seniors can fully be themselves. 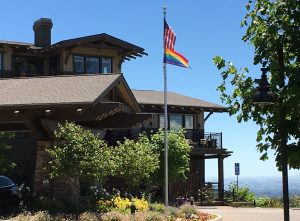 This is a story about the first-of-its kind LGBTQ retirement community. Fountaingrove Lodge in Santa Rosa, California, is the nation’s first state-licensed continuing care retirement community (CCRC) that’s specifically for LGBTQ+ seniors and their straight allies. Today approximately 100 residents from all over the United States live at The Lodge. The average age is 75; the oldest person is 99. It offers a continuum of care from independent living to failing health.

Filmmakers Pam Walton, 77, and Ruth Carranza, 72, are best qualified to make this film – they’ve been living at The Lodge since December 2017. They’ve come to know and have gained the trust of the people who live there. The Lodge looks inside this unique experiment in gay/straight living to show us the daily lives, hopes, and fears of people in their 70’s, 80’s, and 90’s. What you discover will surprise you.

“Advocates for L.G.B.T. seniors have argued for years that long-term care facilities fail to protect them against discrimination and harassment, leaving them particularly vulnerable.”

—“A Retirement Community Turned Away These Married Women,” The New York Times

“Same-sex partners may not be allowed to room together; staff may treat LGBT elders insensitively; recreational interests may be ignored or denied; finances and benefits normally given to heterosexual partners may be withheld from surviving same-sex partners; and the loneliness and isolation that accompany aging may be compounded by discrimination.”

The LGBTQ+ community in the United States has been waiting for a place like Fountaingrove Lodge. The New York Times, and the San Francisco Chronicle noted its opening in November 2013. And now the country is waiting to see whether its welcoming and accepting policies will survive and encourage the building of other like communities.

“The Lodge captures people in their dailiness and ordinariness — and shows how extraordinary that is. It reveals humanity at its best. Too many people can’t even imagine such lives full of joy, heartache, decisions, trauma, work and play connected to people not exactly like themselves.”

—Kathryn Lindquist, Former Lecturer in the Humanities, University of Utah

“This documentary provides a unique and thoughtful glimpse into the prideful lives of older LGBTQs and their allies, aging in a very special CCRC. Those who have fought so hard to be out in society should not have to fear going back in the closet in later life. And the integration of the allies is a lesser seen but truly important component of the organization and the film. Hopefully, we will see many more CCRCs like The Lodge.”

“The Lodge is a sanctuary for LGBTQ senior citizens, offering a safe space for self-expression and social interaction that many of the Fountaingrove community had never really experienced anywhere else. It is a timely documentary that spotlights a significant but often overlooked community with touching empathy…” »Read full review

“The Lodge is truly relevant for this moment and for those who mistakenly believe this subject matter is not relevant. Quite the contrary. It is essential.”

“The Lodge is a beautifully told story. It will make a difference in the lives of both gay and straight seniors.”

“Poignant and nicely told. A charming slice of life with edge and meaning.”